There are very few cocktail bars in Brighton that are quite as grandiose as the Hilton Brighton Metropole Bar. Plush quilted armchairs join circular booths for more intimate drinking, with the entire room looking out across the sea, but pretentious it is not; in fact, this decadent environment sets the scene for a fascinating fictitious tale. 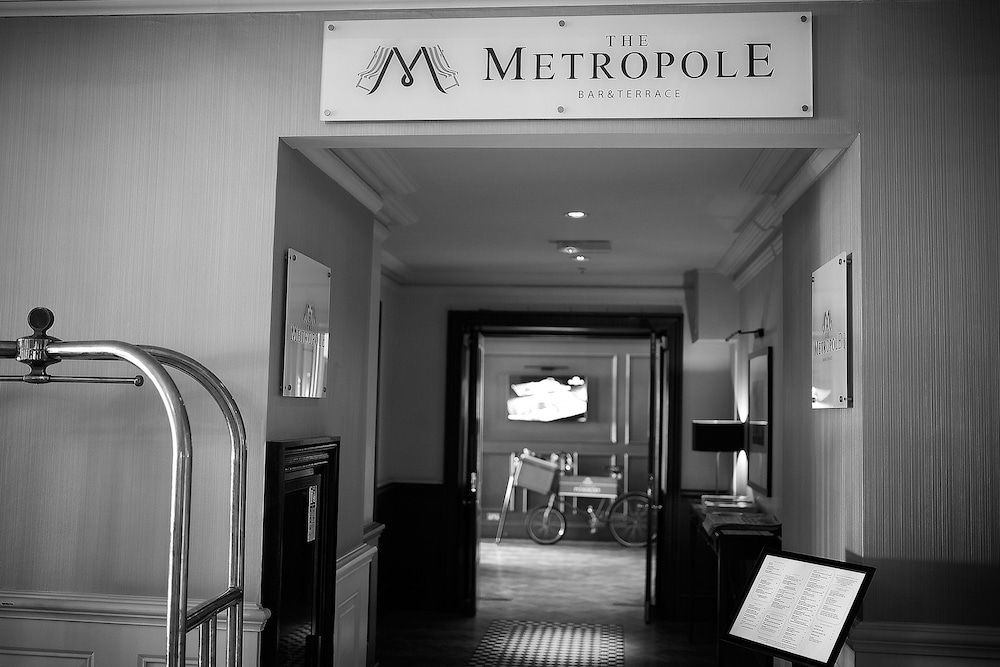 Inspired by a great

Maritime in nature, the Metropole’s menu is inspired by the legacy of Neil Halverson Hilton, a distant relative of the founder of the Hilton brand, Conrad Hilton. According to the hotel’s bar, he was an intrepid explorer and Admiral in the Royal British Navy during the mid-1800s, travelling from Norway to the United States via the southern shores of the UK. An avid epicurean, the admiral had a reputation for seeking out only the finest things that life has to offer, namely the mystical elixirs of faraway lands – and thus, the Metropole’s cocktail menu was born. 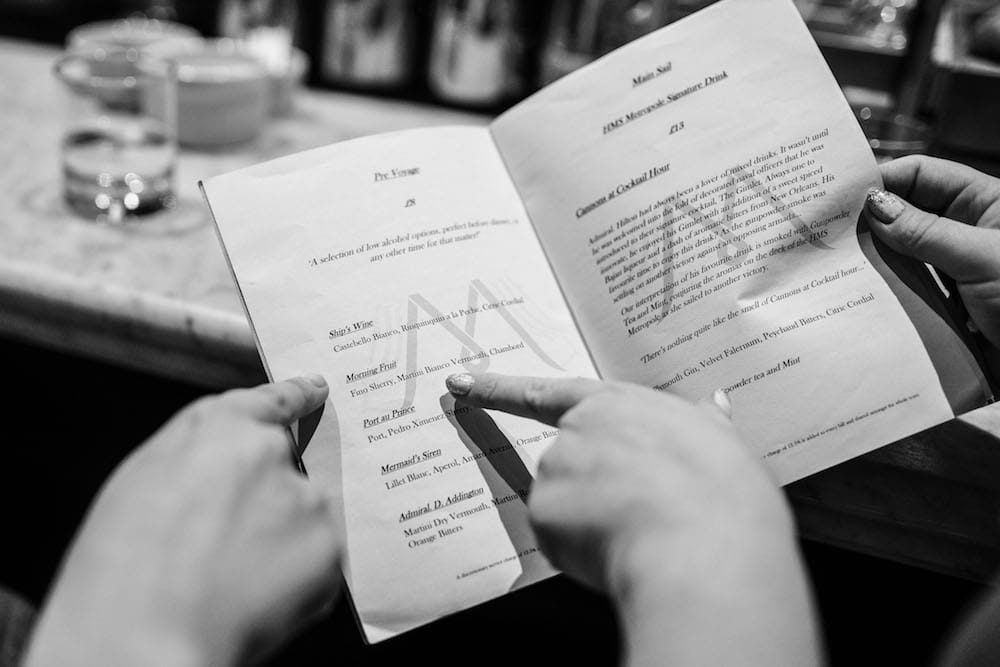 There’s a focus on the theatrics at the Metropole Bar, with both the establishment’s signature cocktails served with a little drama. First, there’s the Cannons at Cocktail Hour (£13), a heady combination of Plymouth gin, Velvet Falernum, Peychaud bitters and citric cordial which is shaken then poured into a glass, the resulting tipple then smoked with gunpowder tea and mint under a glass dome at the table.

The cocktail brings together the admiral’s innovative addition of sweet spiced Bajan liqueur and bitters to the classic Gimlet, mixed in the victorious defeat of an opposing armada. 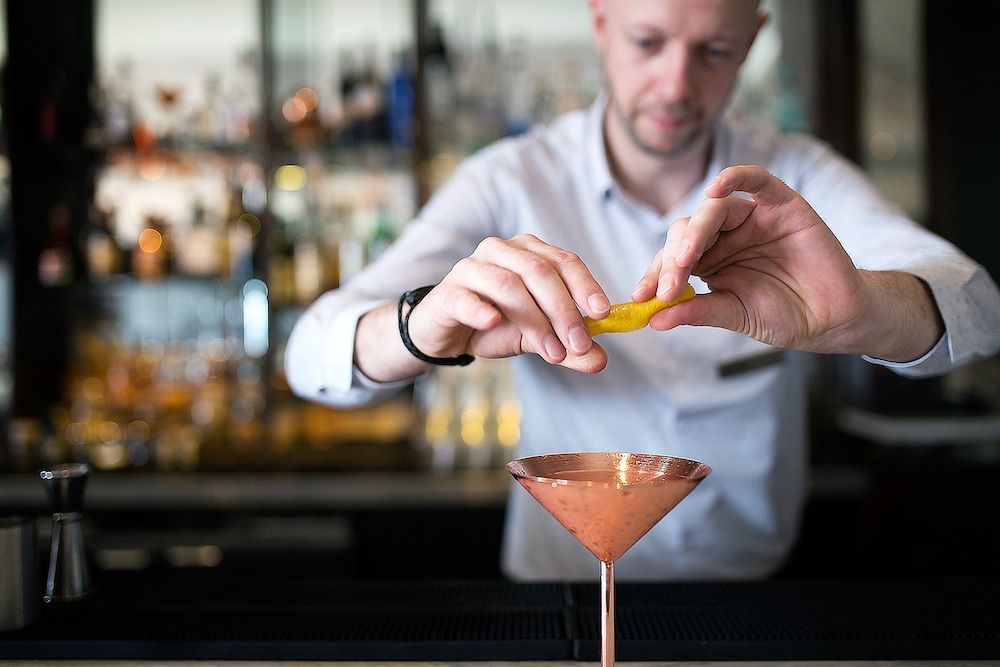 Working up a thirst

The Message in a Bottle (also £13) further contributes to the theatrics, combining Cuban rum with angostura and orange bitters, pineapple and Demerara shrub, and serving it inside a giant spherical ice cube – ready to be hammered open by the recipient. As legend would have it, the cocktail is inspired by a map that was rolled and tucked inside an ornate bottle. 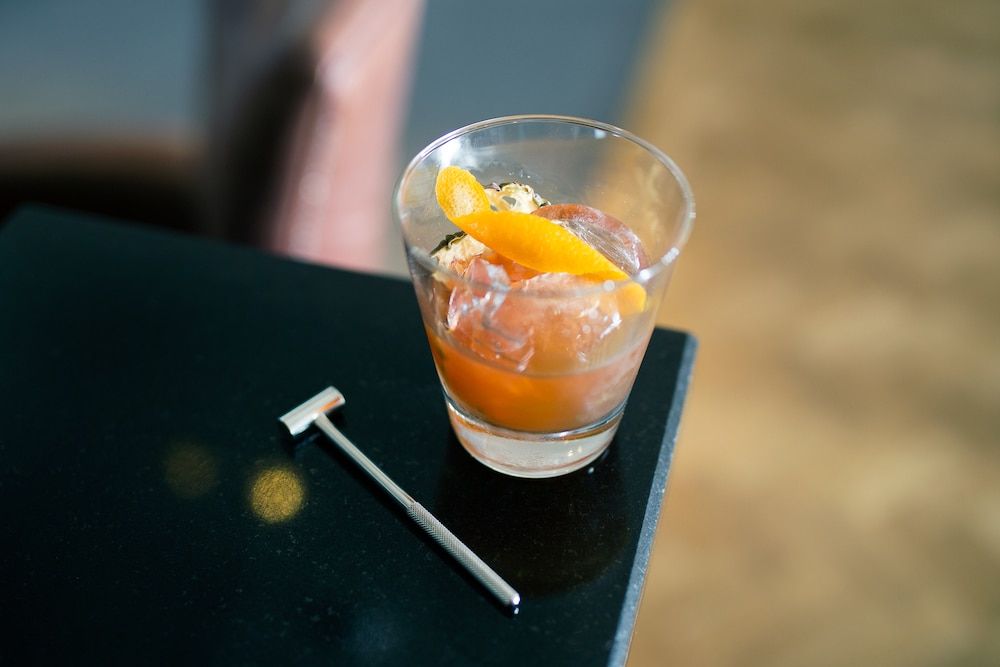 The bottle was duly smashed open and the map retrieved while the admiral, overcome by curiosity, changed the course of his ship. The map led him to South America where he would taste the local liqueur – rum – for the first time himself. 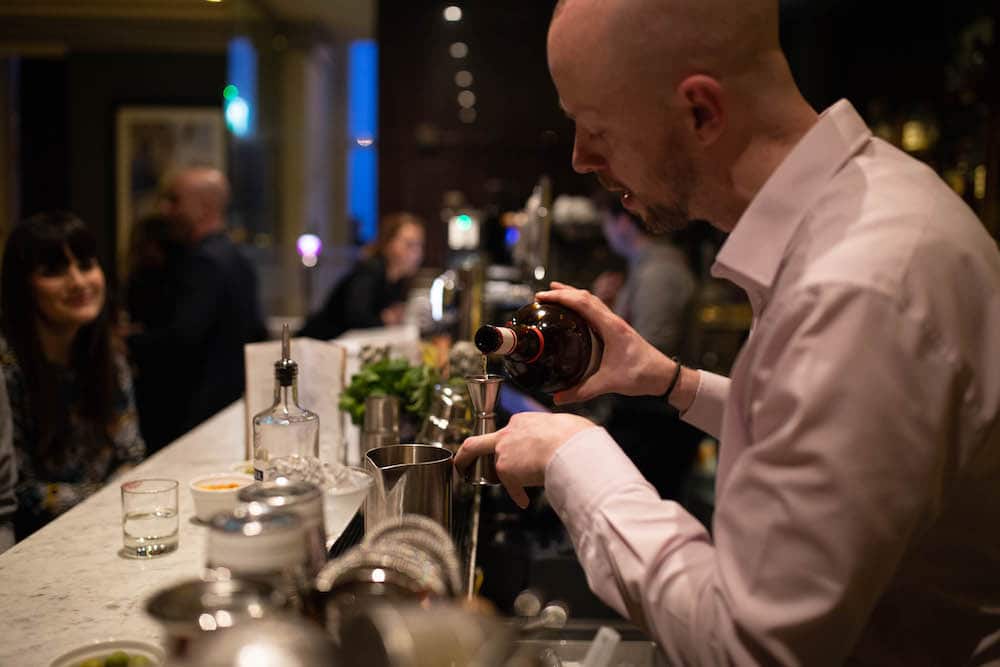 The flavours of Cuba

In dedication to Hilton’s discovery of this wondrous spirit, this cocktail combines all the flavours of Cuba and its surrounding islands, serving them in a way that’s designed to inspire imagination. It’s an outstandingly creative touch from the Metropole that will be appreciated by any drinker – even if the only real end result is that it gets you drunk. 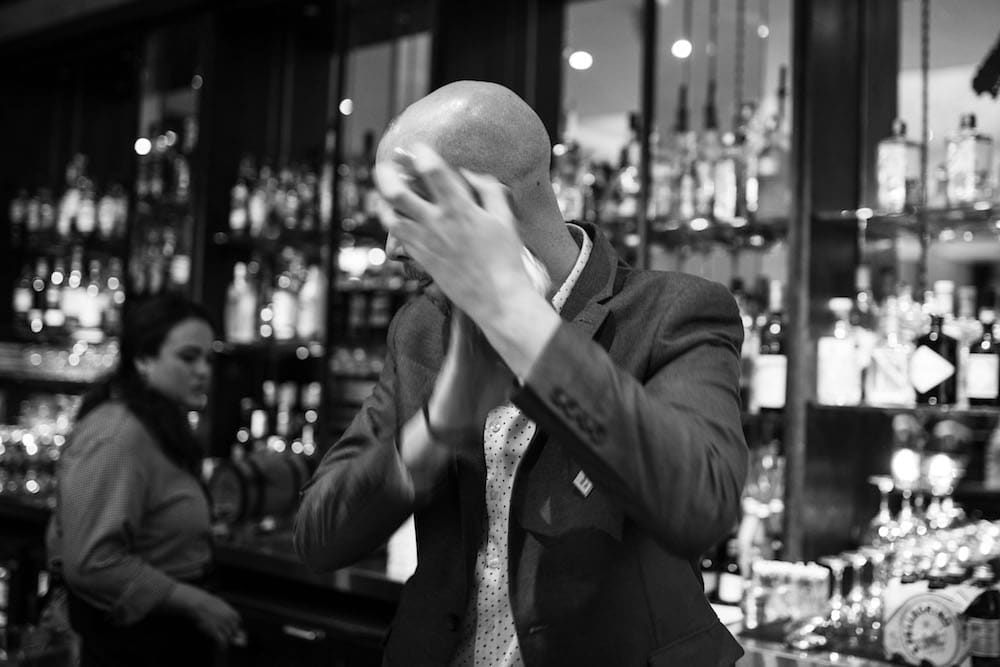 While these two may be the only cocktails complete with impressive displays, the other cocktails on the Metropole’s menu are just as intoxicating. From the Mayan’s Gift (Martel VS Cognac, Grand Marnier, Cacao Bean Liqueur, Angostura Bitters, Maple Caramel) to the Cannon Berry (Highland Park 12yo, Chambord Liqueur, Lemon Juice, Grenadine, Vegan Foam)…

…each carefully constructed recipe creates a beverage as delightful as the last – though its Passiflora Island is an absolute must-try.

…created with Laphroaig 10yo, ginger wine, passionfruit, lime juice, vanilla agave and Champagne, the Passiflora is brimming with tangy, tropical notes which prevent the sweet nectar of the fruit from becoming too sickly.

For the rare occasion when long drinks become too much, the Metropole’s cocktail menu also offers a selection of sharing punches (“a precursor to the modern cocktail”) and non-alcoholic options (“for sailors suffering with sea-sickness”) – each and every addition complete with a small fable connected to the illustrious Admiral Hilton. 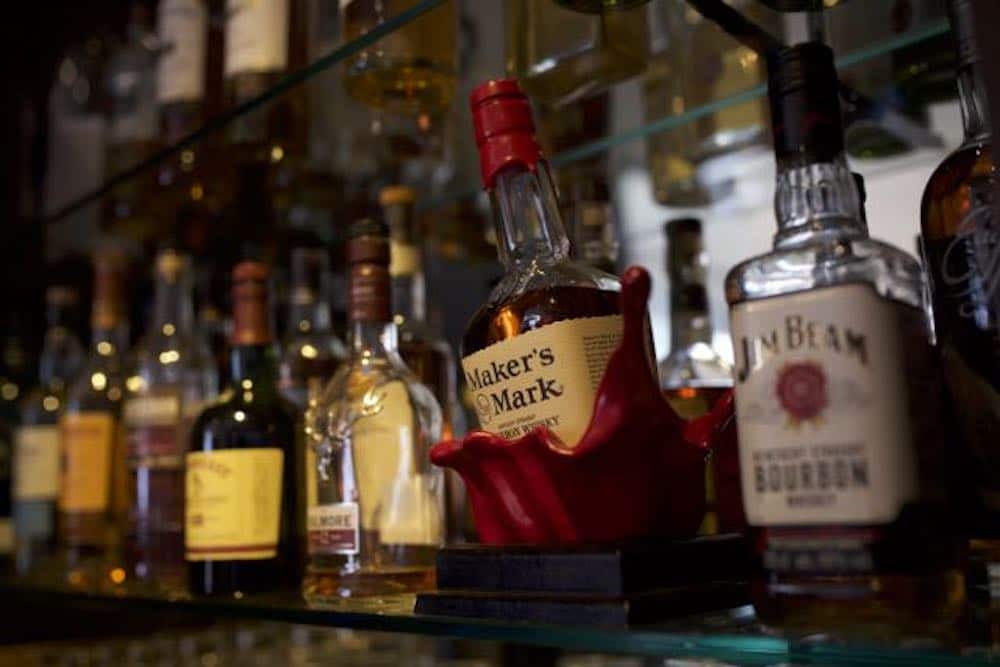 While there’s an abundance of cocktail bars across Brighton and Hove, there are few which hold a torch to the class and theatre presented by the Metropole Bar. Hosting drinks, all-day dining and a decadent afternoon tea menu, the Metropole Bar excels at creating enticing meals and cocktails that evoke the venue’s coastal setting. If cocktails aren’t your thing, there’s also an impressive champagne list, a unique selection of gins, craft beers and wines, and more spirits than you’ll know what to do with.

Expect a real taste of the world at this fine establishment. After all, it’s what the Admiral would have wanted. 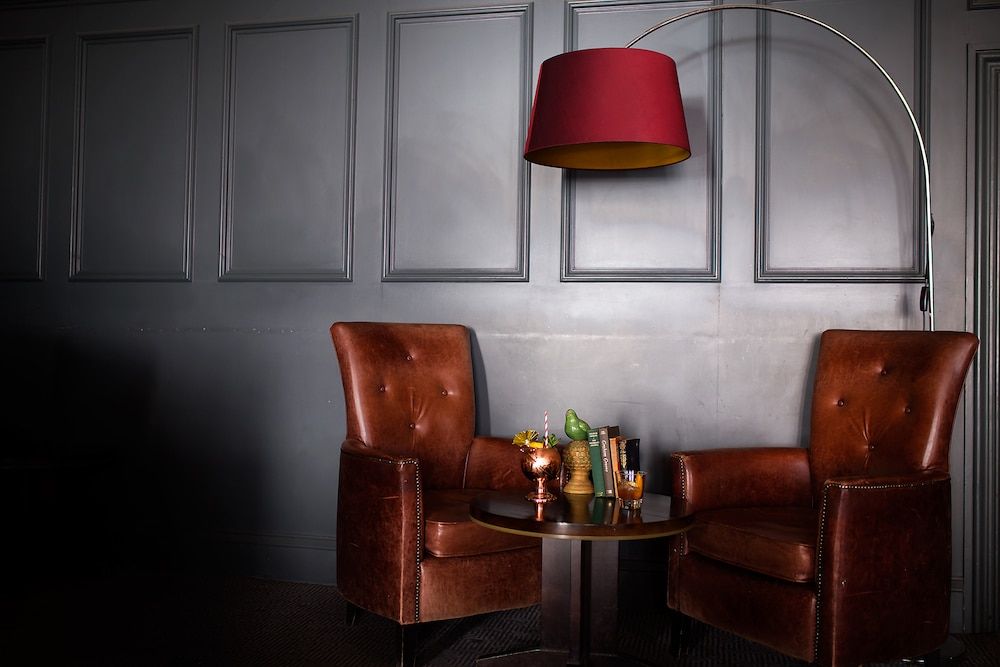