Delicious homecooked pub classics in the heart of Hove. The George Payne boasts a friendly and inclusive atmosphere and modern decor. Their menu is inclusive of all dietary requirements.
1 Review
Home / Restaurants / Hove / The George Payne Pub Hove 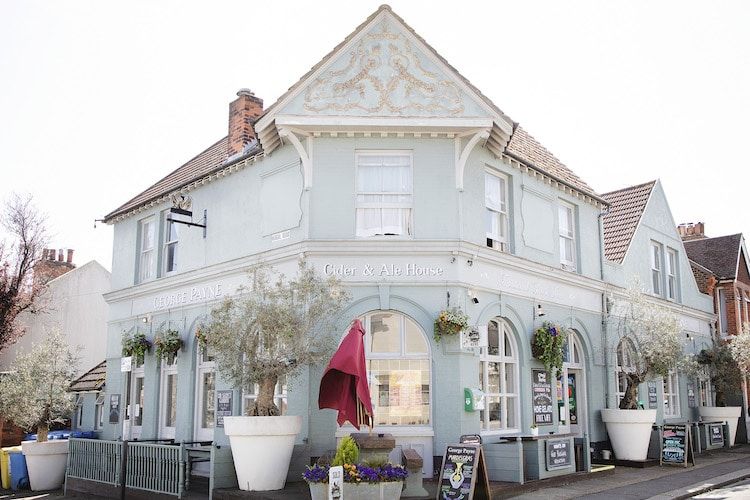 The current owners, Zoe and Steve, took over the George Payne, what was then The Kendal Arms, in 2012 and within a year and a half had won the award for Best Turnaround Pub of the Year (2013). The team pride themselves on providing a friendly service in a safe, welcoming pub that serves quality drinks, home-cooked food and plenty of entertainment. 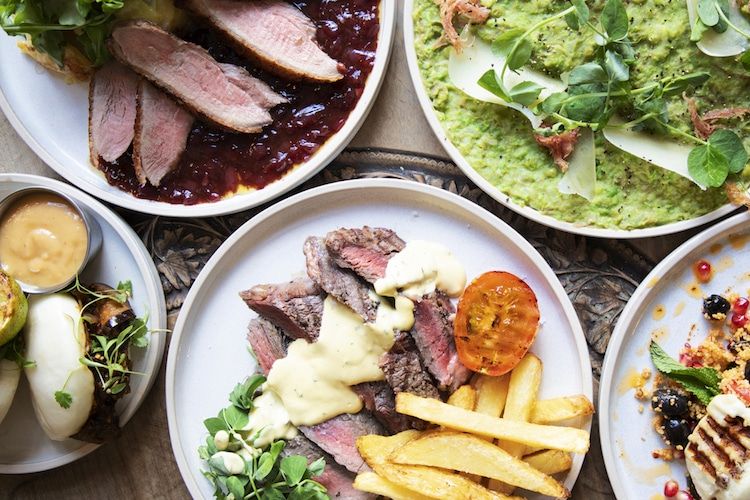 The food offering at the George Payne ticks all the boxes for classic pub fare, which naturally is elevated in standard to suit the Brighton and Hove clientele. In addition to a good burger and fish and chips, you’ll also find options such as Sichuan bao, Korean fried chicken and a vegan pulled BBQ jackfruit burger (check The George Payne menu for current offerings). 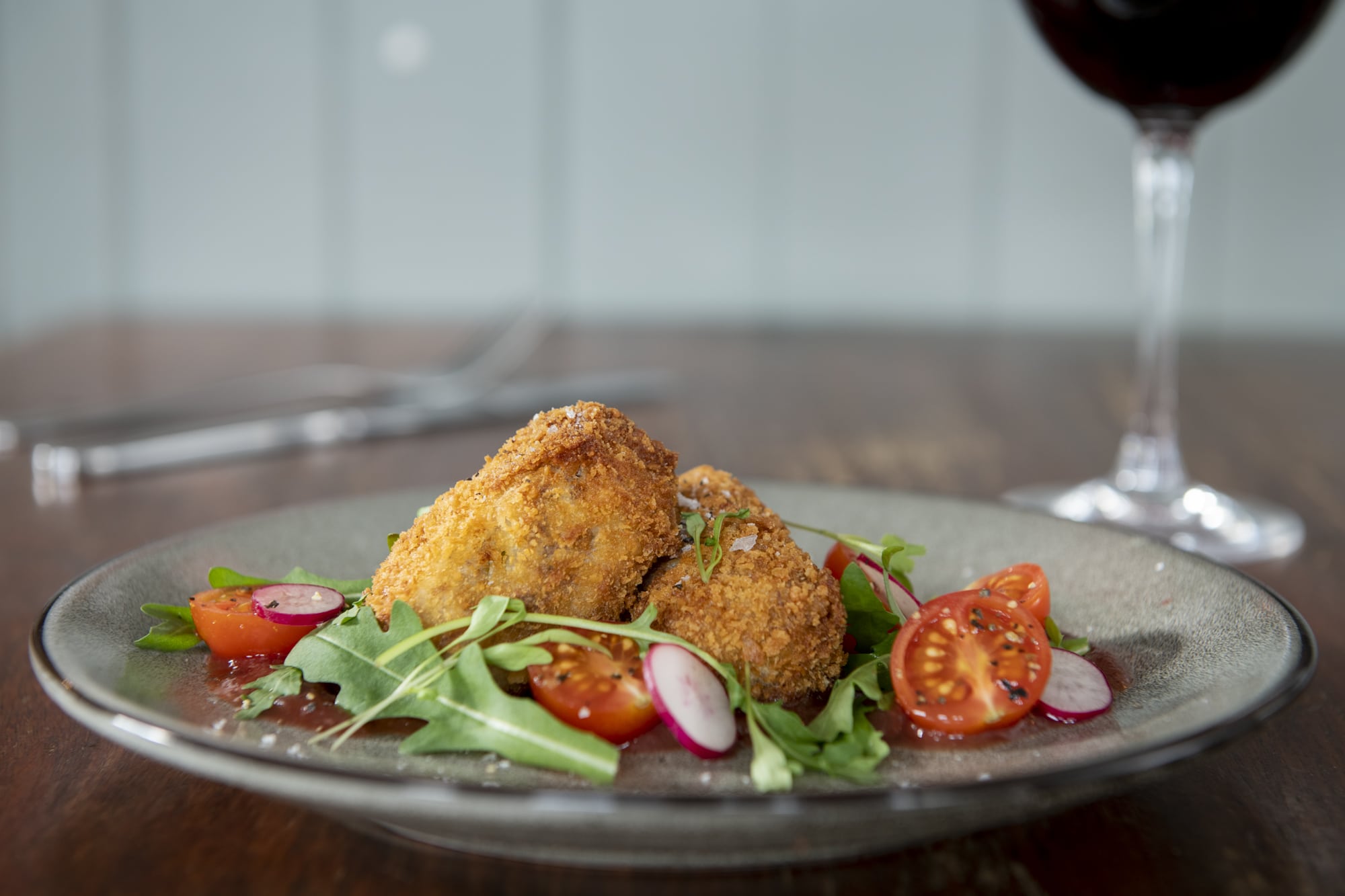 No one is left out on the George Payne food menu, with well thought out recipes for vegan and vegetarian diets and clearly marked menus to indicate gluten-free dishes or adaptable options. Even their traditional pie, mash and liquor, which is available as a two-for-one offer every Wednesday, comes with a vegan and gluten-free option. 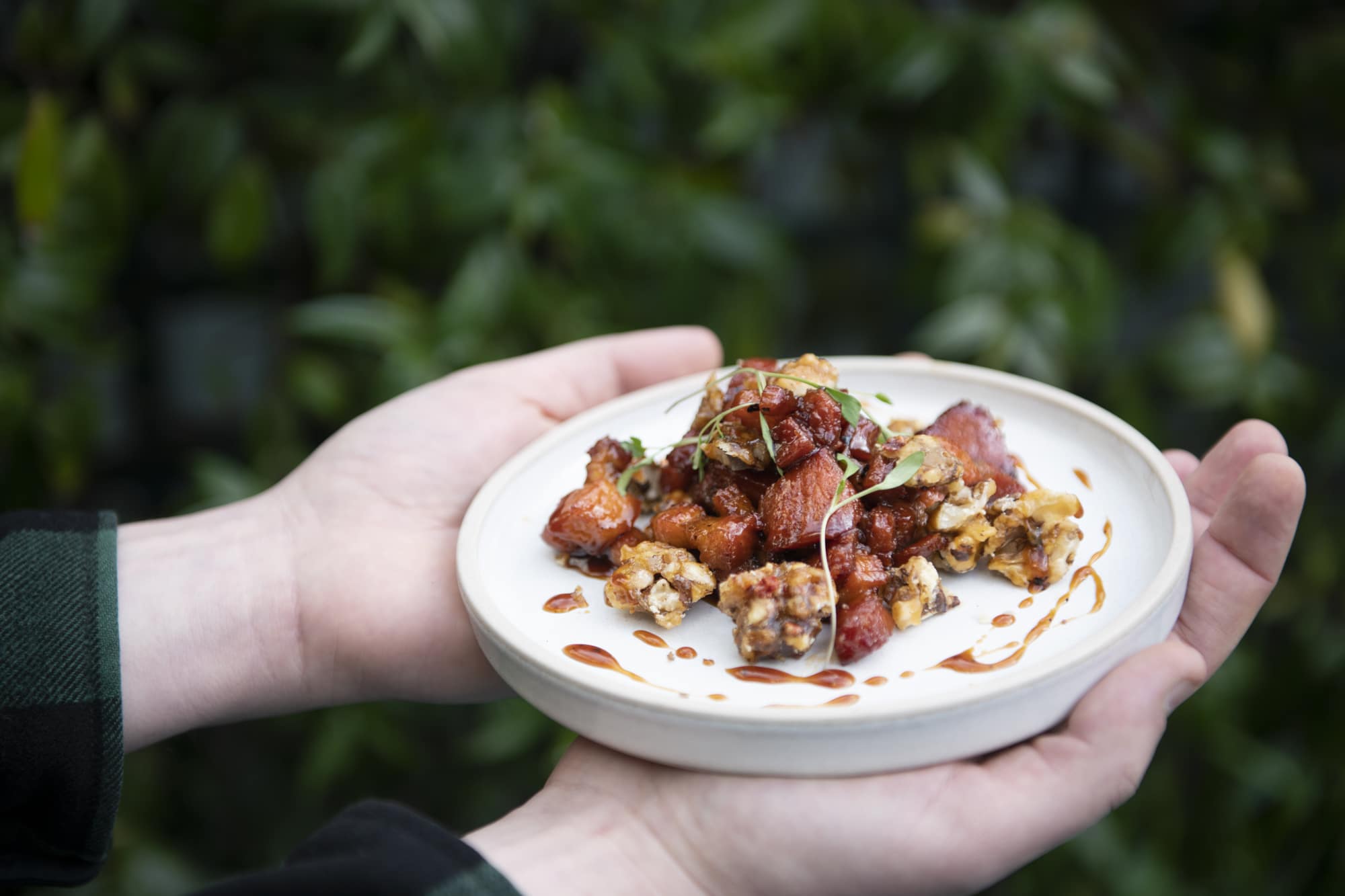 Kids get there own, reasonably priced, menu which stands up as having plenty (at least six) child-approved options, which also include dishes that are vegetarian, vegan and gluten-free. Kids eat for free Monday to Friday between 4 – 7 pm with one free main per child when an adult buys a main.

Not many pubs also boast a menu for their canine visitors, but at the George Payne, they like to make a fuss of everyone. Dogs can have a selection of treats from the A-La-Bark menu, including a doggy beer, with profits going to charity, Canine Concern. 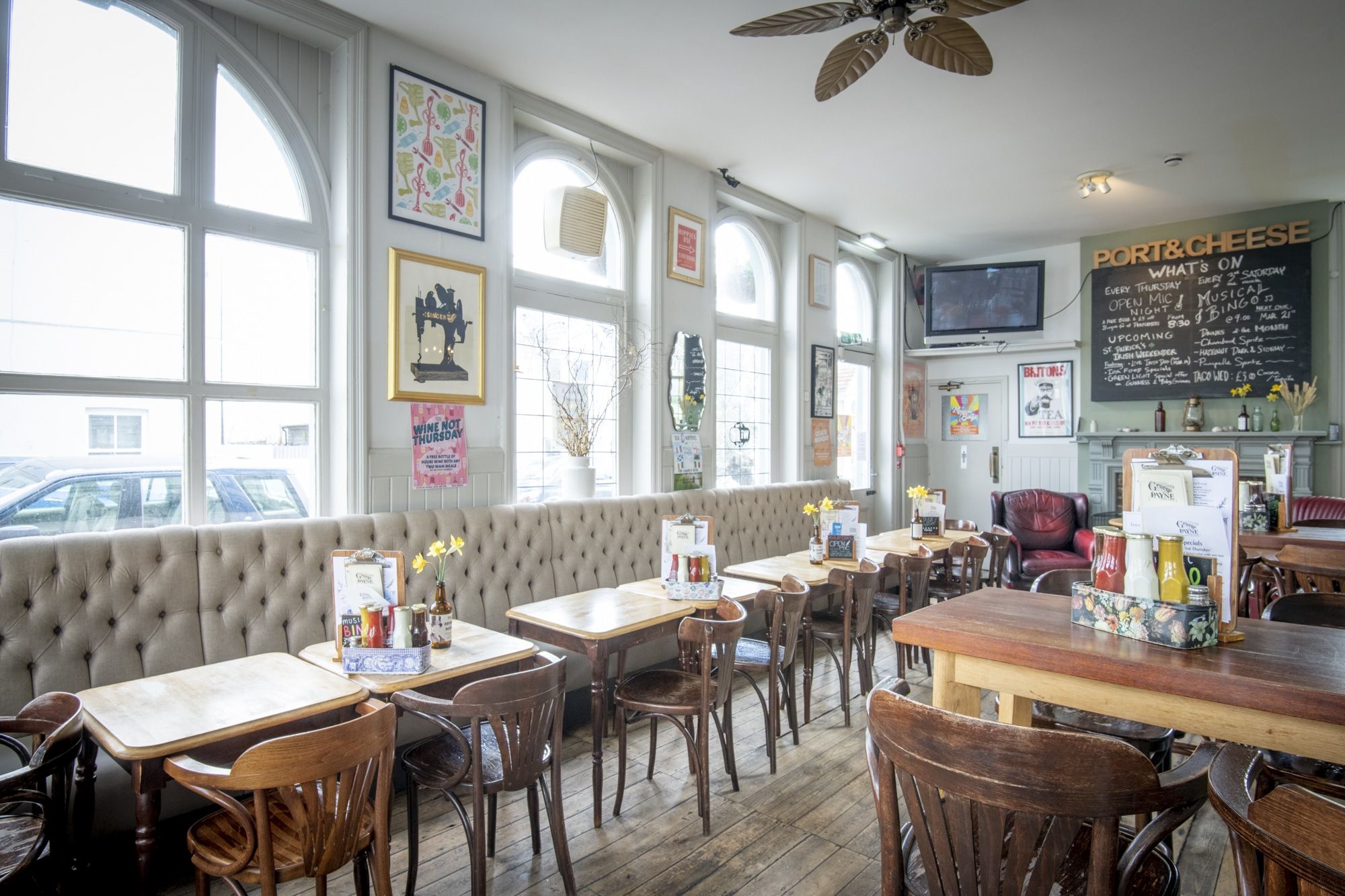 Sunday lunch at the George Payne

As a family pub, the George Payne doesn’t miss a trick when it comes to the classic Sunday lunch. They usually serve four meat, a veggie and a vegan option. Plates are generously piled up, and service runs through until 8 pm, perfect for late starters or Sunday workers. As a pub with plenty of room, they’re also ideal for big gatherings, although booking is strongly advised. 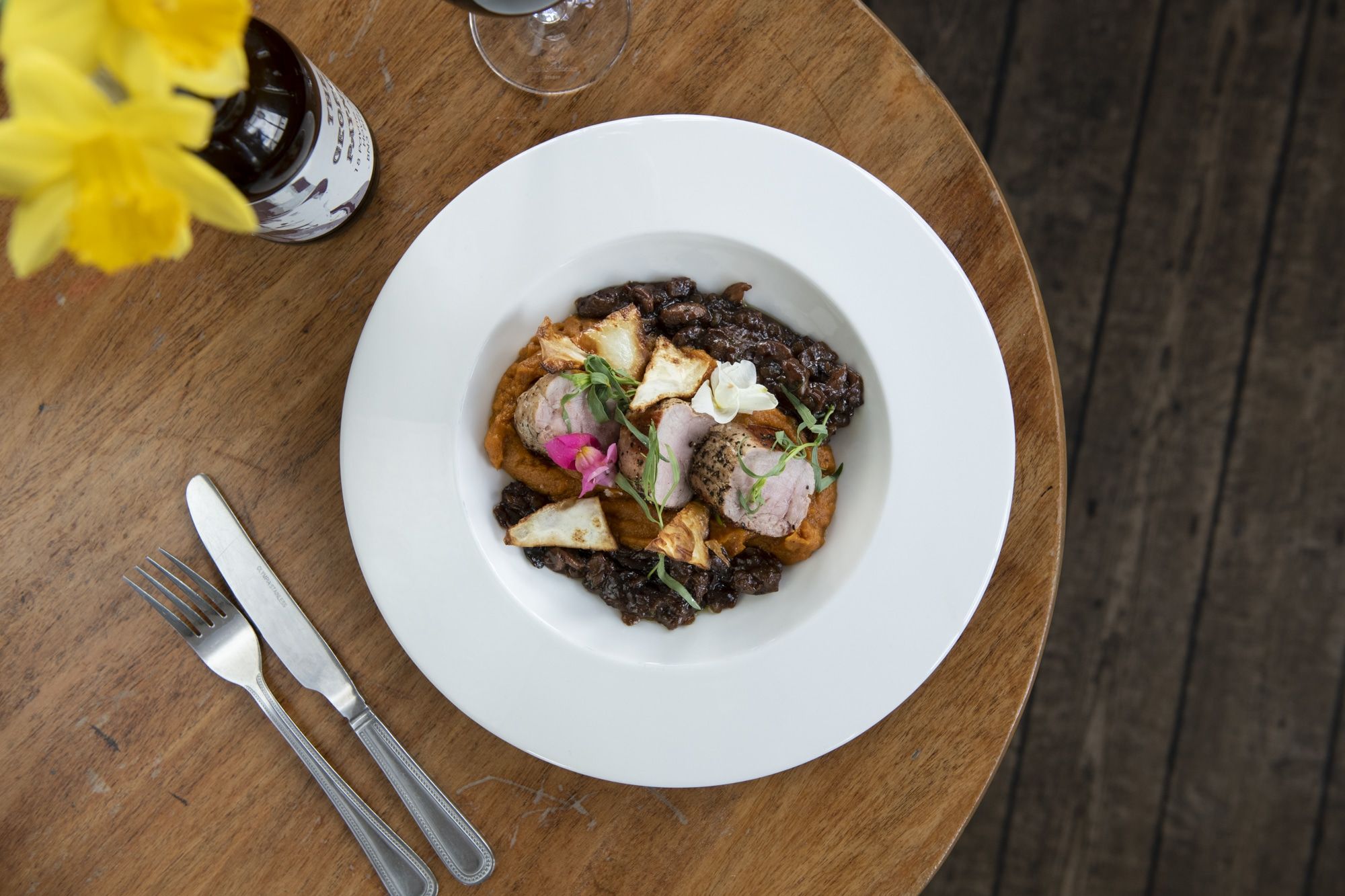 To keep you coming back, the George Payne runs an ongoing series of weekday promotions on food and entertainment, keeping themselves the social heart of the local community. Offers include Wine Not Mondays; a free bottle of house wine with any two mains bought. Open Mic Thursdays where you can sing for your supper (performers get £5 off a main meal and a free bottle of beer). Or start the weekend with Fizz and Fin Fridays; a complimentary glass of fizz with fish and chips, or the fish special. 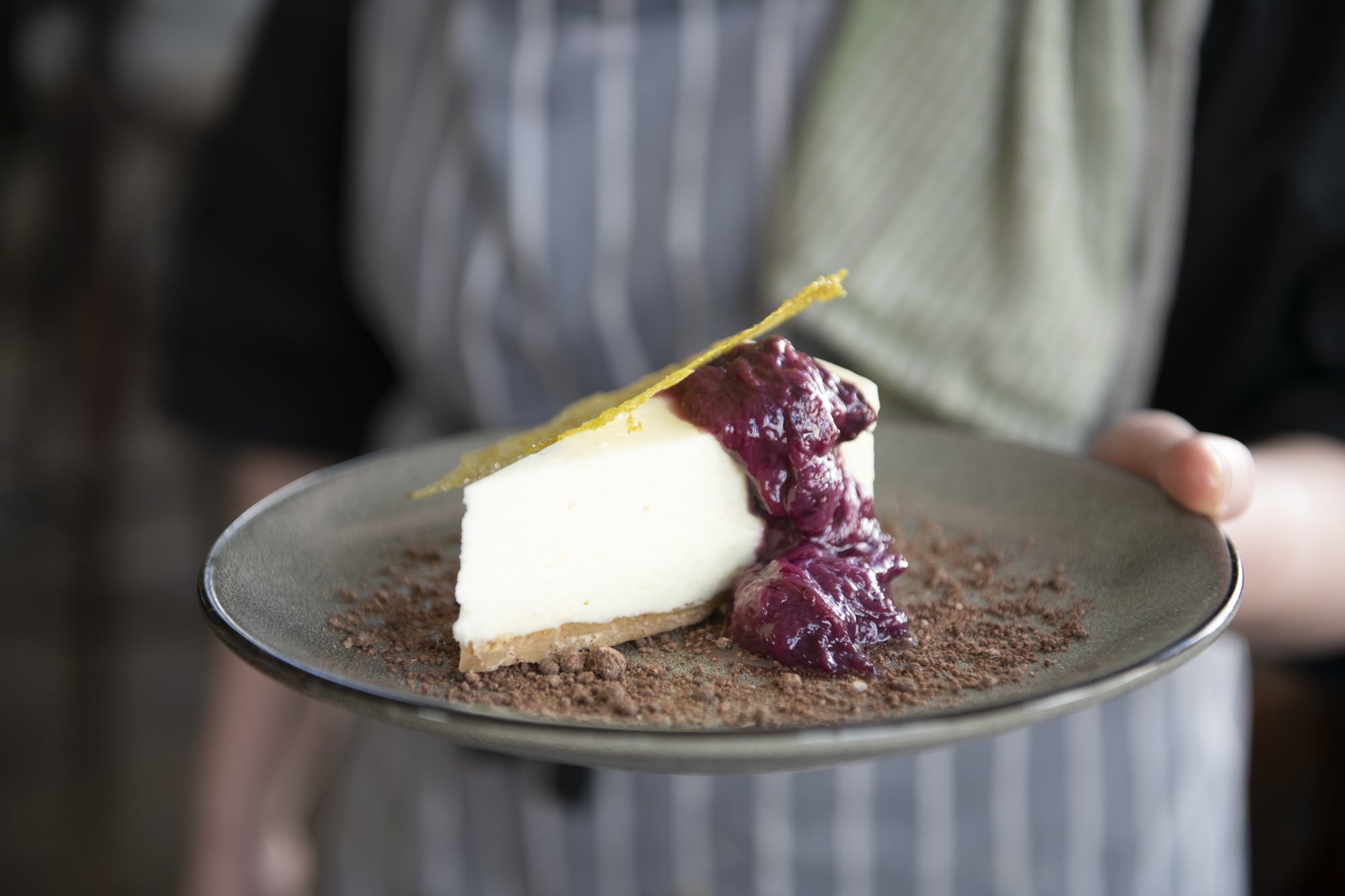 All those savings means sweet treats are less of an indulgence (at least for the wallet) The George Payne serves up some fantastic desserts, with an inhouse pastry chef and serving Hove Gelato, which operates out of their sister venue The Railway Inn.

Parties and events at the George Payne

The George Payne is also available for private hire and parties, for which they have a selection of buffet menus to suit all budgets. The events calendar at the George Payne is heaving with live music, DJs, themed parties, taster evenings and quizzes. Keep an eye on their events page and follow them on social for up to date details of all events.